We do a lot of talking about what we see during our daily 60-90 minutes in the car. Cars, trucks, red lights, green lights, blinking lights, the highway, the regular street, cranes, cranes turning around, buildings, birds, bikes, people, the letters A and P—if it exists in downtown Austin, we’ve probably talked about it. It’s a way to pass the time that feels at least minimally engaged with the kids and mentally stimulating, which assuages some of our guilt for subjecting them to a daily commute strapped down in carseats.

Right now, though, when we point out a feature of interest (look, there’s a firetruck!), Annie starts chirping the first question that has truly stumped us as parents:

Look out your window, it’s right there!

Well, no, we passed it now.

I don’t know, Annie, can you? I’m not sure what you can see.

I can’t see out of your eyes, Annie, I don’t know if you can see it. It’s right there! LOOK RIGHT THERE.

So far we have managed not to drive the car into the river.

Just noticed: I now have the option in Outlook to click a little thumbs-up button to “like” one of my work-email messages. 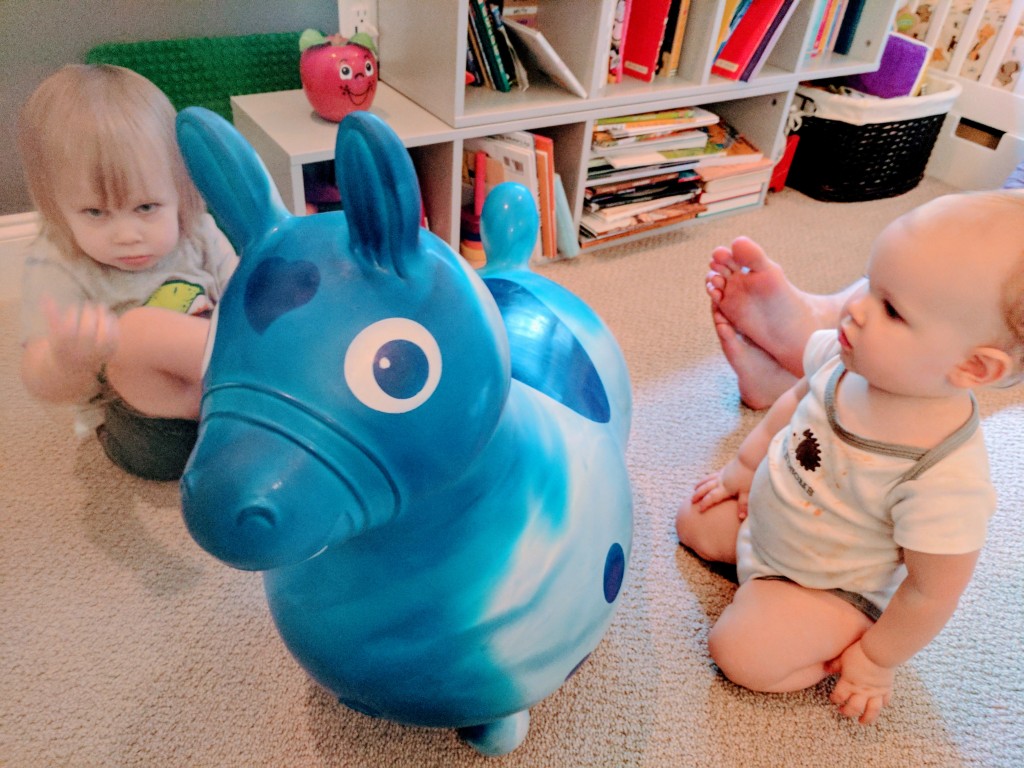 Bryan and I impulse-bought this fellow out on a date night about 9 months ago, having wandered into Toy Joy after a couple of beers and been beguiled by his round and bouncy charms. He’s apparently quite popular in Japan, and specially patterned for some significant anniversary. Suitable for ages 3 and up. The first time we put 18-month-old Annie on it, she promptly pitched off and hit her forehead on a door frame.

Recently, however, her legs have grown long enough to reach the ground around him, and she has caught onto the bouncing. I named him Rumpus McBumpus, but Annie calls him “Rabumpus Rabumpus.” She requests, “Some Rabumpus time maybe?”, rides him like a mechanical bull, and then obligingly hops off so that Paul can have a turn. Paul also loves Rabumpus though we have learned our baby lesson and keep a firm hold on him during his rides. Just, you know, in paradise. It still amazes me how much the body changes during pregnancy. My hip bones, I swear, are not where I left them.

We got to spend July 4 with excellent friends and family. We started the day at the climbing gym with the Drehers.

After lunch and a nap, we headed to the wading pool with Aunt Peanut.

Then Annie had her second go at watermelon, which she still primarily prefers to squash to death in her fists. She also discovered that she loooooves kefir (basically watery plain yogurt).

Then Dad gave her a quick bath so she was capable of a goodbye hug.

Just a nice Saturday around the house yesterday. Started with some peaceful indoor playtime. She’s pretty good at getting on and off of chairs and furniture by herself now. Terrifying. And possibly related to the way she’s perpetually covered in little bump marks and bruises these days.

We moved on to some good splashing in our new, shady under-deck.

Our enjoyment of play and relaxation was increased by watching Dad hard at work finishing construction. I covered her ears for the sawing.

I suppose if we can handle one toddler + power tools, we will probably be able to cope with a second kid. Fully soaked by her outdoor adventures, she got a second suit of clothes after nap time. We call this one her “park ranger” outfit. (She can also eat whole apples by herself now. And by whole, I do mean stem, core, and all.) Later she drenched herself again and required yet a third outfit, but I lost steam on the documentation, so we’ll leave it here.

There were moments leading up to this year’s Pig Roast when I feared we were ignoring obvious signs from the universe to give it up: the exorbitant pig price thanks to last year’s pork plague, the weeks of relentless thunderstorms forecast to continue through the holiday weekend, the 200-mile drive with the one infant in the world who won’t sleep in the car.

Thank goodness I kept my doubts to myself, because this year’s roast was fabulous. Preceded by Cameron and Sous by a couple of days, Bryan and I drove up with my mom and Annie on Friday. She didn’t sleep much but chilled out peacefully in her carseat. Everyone had lunch at, appropriately, a Dairy Queen, and we made it to the ranch with hours to spare before the first tasty meal of the weekend: french dip sandwiches made with smoked prime rib, and strawberry shortcake for dessert. Between the caloric demands of milk production and the possibility of a sleeping baby waking at any moment, I inhale all my meals these days, but I very much enjoyed my 3 minutes with this one.

Annie had great naps all weekend, and we had many wonderful family helpers, freeing both of us up for a lot more ranch fun than we expected. Saturday’s big events included pig-pit building, for which Bryan had able assistance from friend Chris and thoughtful oversight from Dad/Marc, and The Softball Game, which shows signs of becoming an essential part of our newly-minted Memorial Day tradition. A parade of Pous and neighbors also came by to admire Annie, and I had the proud-parent pleasure of watching her charm them with her fleeting smiles and earnest coos.

Pig prep commenced in the late afternoon with pleura-removal, and Kaci earned her Pig Roast merit badge by boldly excavating the eyeballs. Sous monitored the situation closely—after the roast Bryan would find her with the entire pig skin halfway down her throat—and flopped around the perimeter in her increasingly-dirty e-collar. Heavy rain did not dampen our enjoyment of dominoes, CalvinPong, or karaoke on the barn stage. It did unfortunately dampen our tent-dwellers, but what can you do?

Team Pig assembled at 8:30 the next morning for fire-starting, ingeniously using a leaf blower to help ignite the coals (they only set a small patch of lawn on fire, hardly the worst indignity suffered by the grass this weekend). While Bryan parented, Ali earned the Fire Captain title due to his diligent attention to pit temperature, facilitated by this year’s technological improvement: the Tappecue, which measured the temperature in both pig and pit and broadcast them to the cooks via smartphone app, complete with data visualization and alarms for out-of-range temps. When the skies cleared in the early afternoon, Lisa, Kaci and I hitched a ride on Claude’s boat for a lake tour while the boys monitored, variously, the pig’s temperature and the piglet’s nap.

The pig was unveiled at dinnertime, and lo, it was good. Team Pig dished up the food; I jiggled the baby; the multitudes feasted under sunny-ish skies. We’re already looking forward to next year.

Thanks to Google’s generous parental-leave policy and his accommodating coworkers, Bryan was able to take a month off after Annie’s birth (and will take another when I go back in July). Today that month has ended, however, and he is back in the office for half-days. Despite this easing into it, my solo-parenting has not gotten off to a slam-dunk start.

I’m tempted to blame it all on The Dog. She has been back in a plastic post-surgical cone collar thanks to a 6-month-old butt-wound infection that apparently her licking is entirely responsible for. Five courses of antibiotics barely made a dent, but put her back in the cone for a couple of weeks to keep her from touching it, and the wound heals right up. We tried to reprieve her this weekend, but she immediately chewed it up again, so she’s wearing that dumb cone until we can’t even see a scar.

Unfortunately, she still has not learned how to navigate the house in the cone without crashing it into furniture and walls, and she still tries to scratch behind her ears, making the sound of a truckload of empty milk jugs clattering onto concrete. She’s noisy, is what I’m saying. Really, breathtakingly noisy, in a house where sometimes the click of a door will wake the sleeping baby. (Other times, sleeping baby is completely unfazed by an accidentally-activated alarm clock blaring at midnight until we launch panicked out of bed to silence it. Go figure. )

Sous also hates thunder. Or maybe not “hates” so much as “is utterly terrified by,” something we can mitigate by swaddling her in her thundershirt.

So this morning it happens to be storming as Bryan sets off for his first day back at work. He has gotten Annie down for a nap, so the house is peaceful as he leaves, but Sous is panting with thunder-distress. I think I’ll just tiptoe into the bedroom for the thundershirt, but of course Sous can’t resist crashing up the stairs behind me. Halfway up I grab her cone to keep it from slamming into every subsequent step, but the damage is done: Annie is awake. Which is to say, crying.

Trying not to make it worse, I herd Sous into the second bedroom to panic by herself. I let Annie cry while I go for the thundershirt. It is not it its usual spot. I rifle through the dirty clothes in case it’s been swept up. No dice. I give up on Sous for a minute and try to calm Annie down with shushing and her latest-favorite pacifier. No luck. So now, an inconsolable baby in one bedroom, and a dog having a panic attack in the other.

I go downstairs to make a quick sweep for the thundershirt (nowhere) and realize I’m ravenous. I know I can calm Annie down by nursing her, but that will immobilize me for half an hour, so I grab the end of a bag of Fritos from the counter and run back upstairs. I let Sous out of the bedroom and tell her she’ll just have to fend for herself. I scoop Annie up to nurse: baby in one hand, Fritos in the other. Sous is trying to make circles around my feet, her giant conehead scraping against the walls. Bryan has been gone for precisely 8 minutes.

Half an hour later, though, the storm is over, and Annie has resumed her nap. And now, nearly two hours after that, I’m starting to want to go back upstairs to make sure she’s still breathing. But Cone-Head is downstairs with me, and I know how that will end.