text message from our deck contractor:

Jesus is coming by Sunday to excavate under your house.
Have a great weekend! 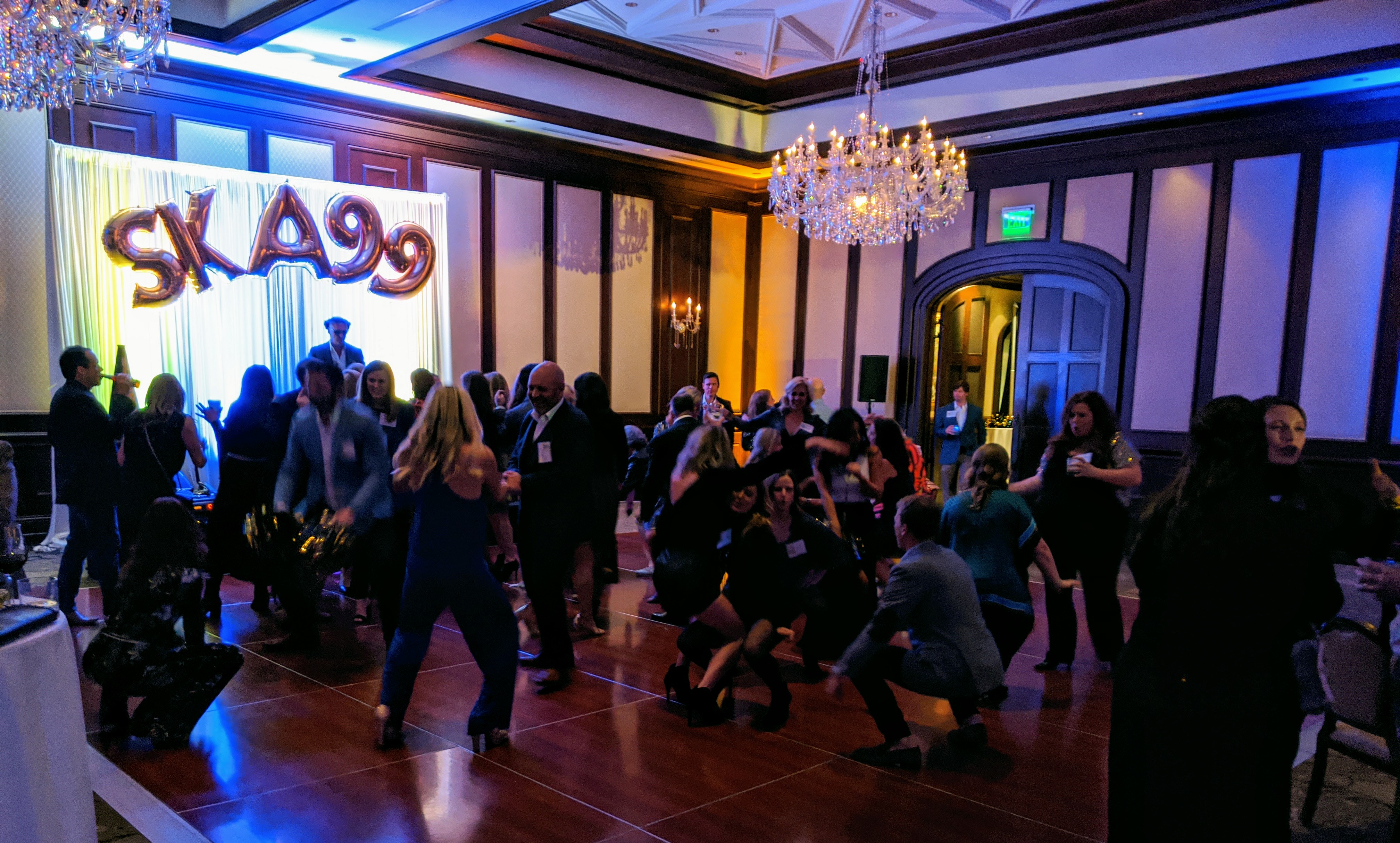 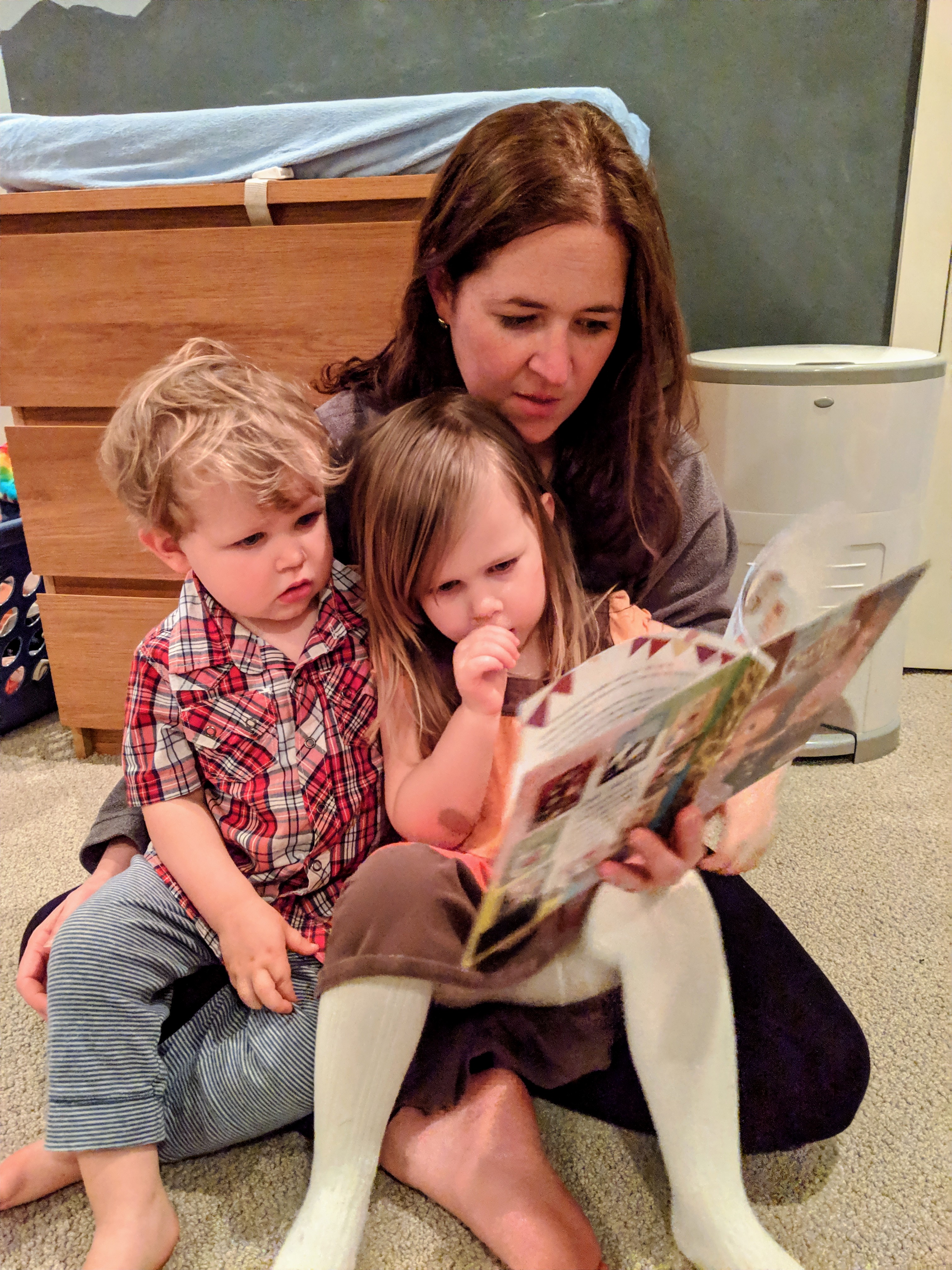 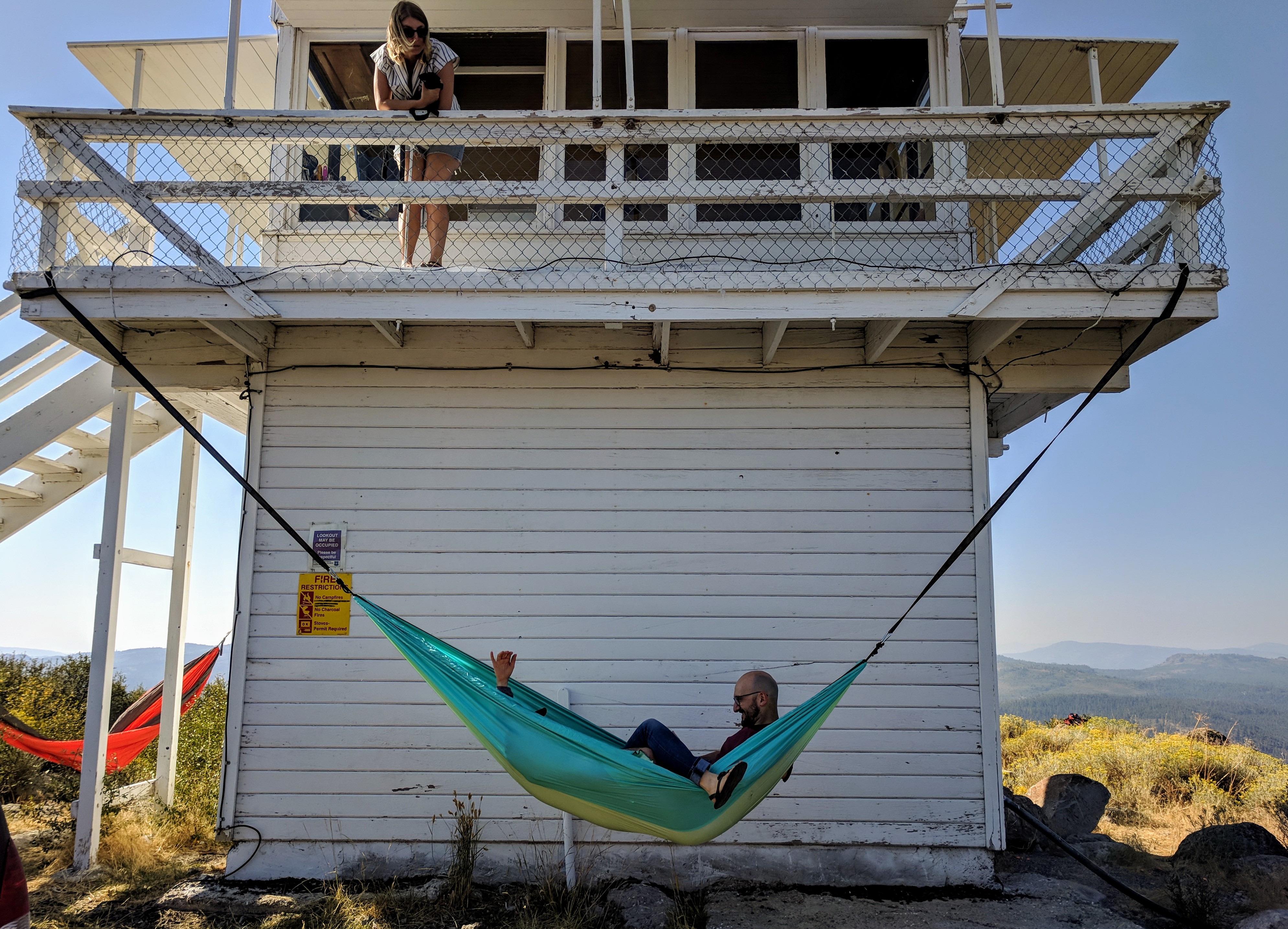 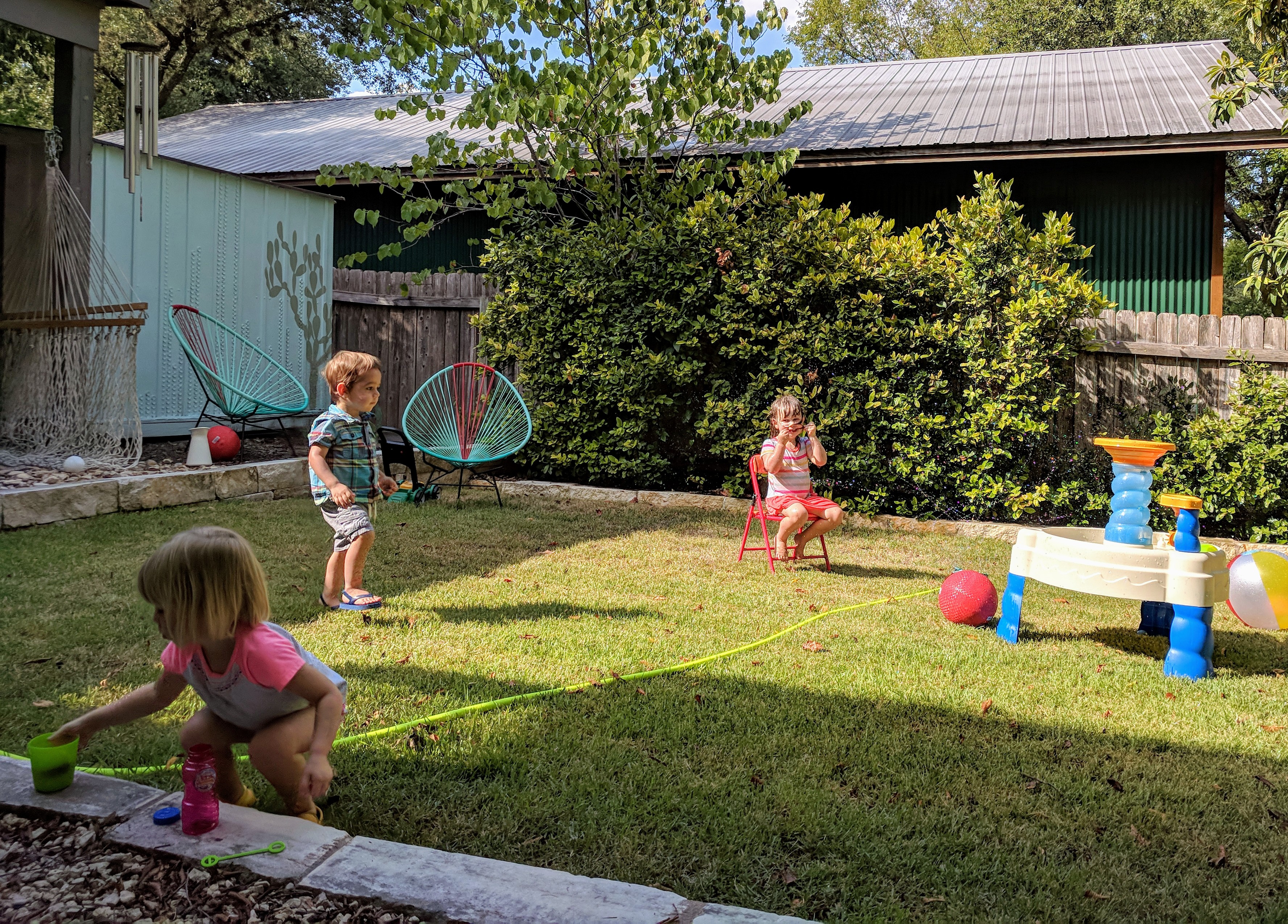 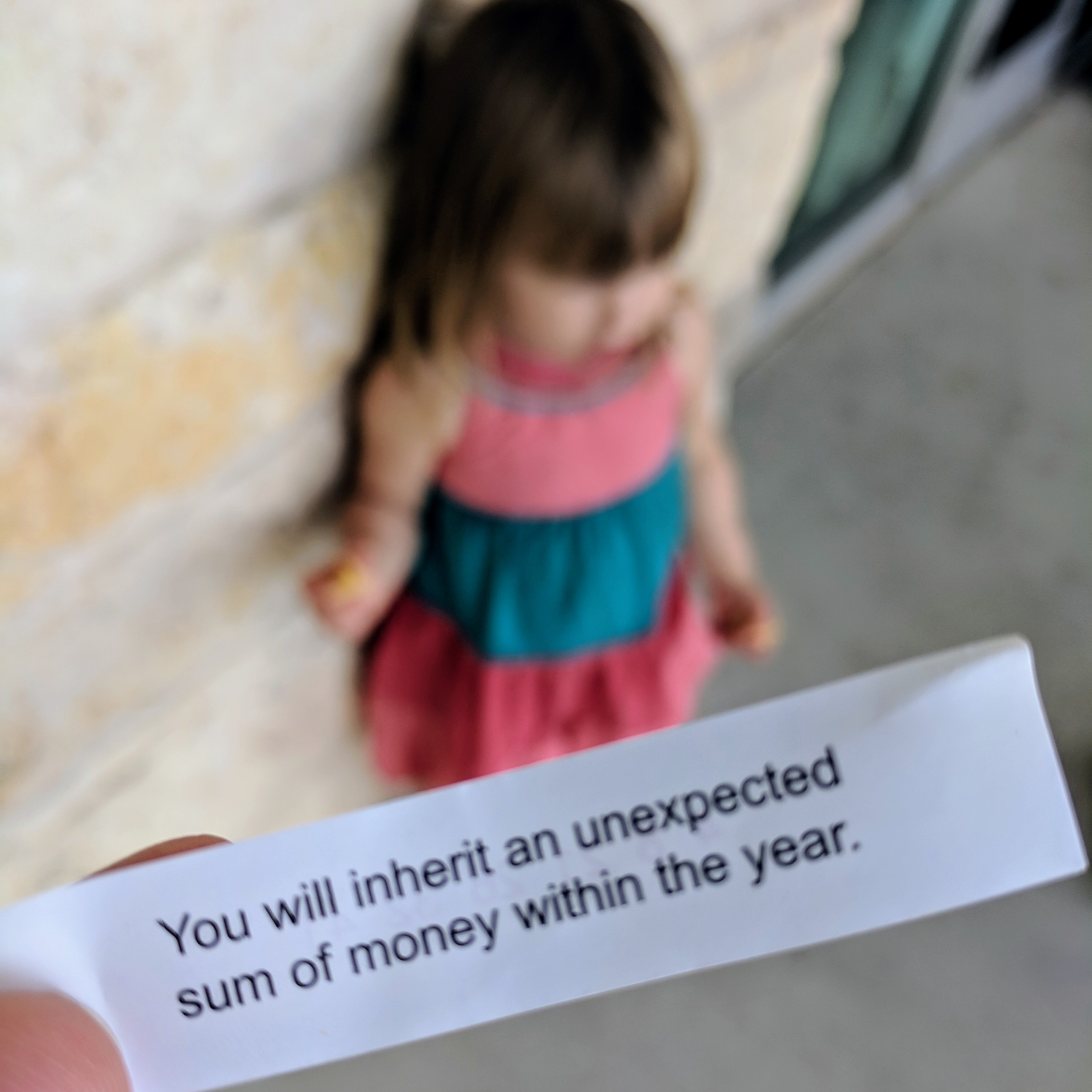 The fortune Annie received in her cookie this morning does not bode well for me.

Bryan: I like to think, when the Revolution comes, we’ll be third against the wall.

We’re definitely in line for the guillotine.

Just remembered that once upon a time it was fun to go out dancing, and realized the next time we’ll do it is probably when one of Annie’s friends gets married.

I spent at least an hour with Annie in a small tent yesterday, lying on the ground while she stepped around me to play, and Paul occasionally burst in to show us toy cars and bounce on my diaphragm. Annie had encountered a stuffed horse, who we’d quickly decided was Snack the Horse, a character in the “Joe the Purple Lizard” stories Bryan started inventing for her and she now coauthors. (Pink and purple cupcakes are usually involved in their adventures—more on this series in future, no doubt.)

Today Snack was feeling low. He was crying for his Grandma, who’d had to go back to her house, but it was okay, Annie told him, because his mom (Annie) and his daddy (me) were right here. She cradled him and talked to him, and reminded him, “You have your toy” (a car). This went on for some time before things got worse for Snack. Now he had to lay down in his bed (one side of the tent), while Annie went to her bed (the other side of the tent). So much for Mom and Dad. Annie pet him and consoled him, and, from “her bed,” instructed me to tell Snack that he had to stay in his bed while Annie was in hers. Back and forth she went, meeting and parting with poor, weeping Snack in his bed. Things took another turn in Act III, when Snack could no longer have his toy car for comfort. “You canNOT have it, Snack, you canNOT have it,” Annie explained gently, as she hugged and rocked him, and held the car out at arm’s length.

Snack bore up well under the stress, in the end, and I felt like I was treated to an immersive performance of how toddlers make sense of hardship through play. Christmas at the Ranch.