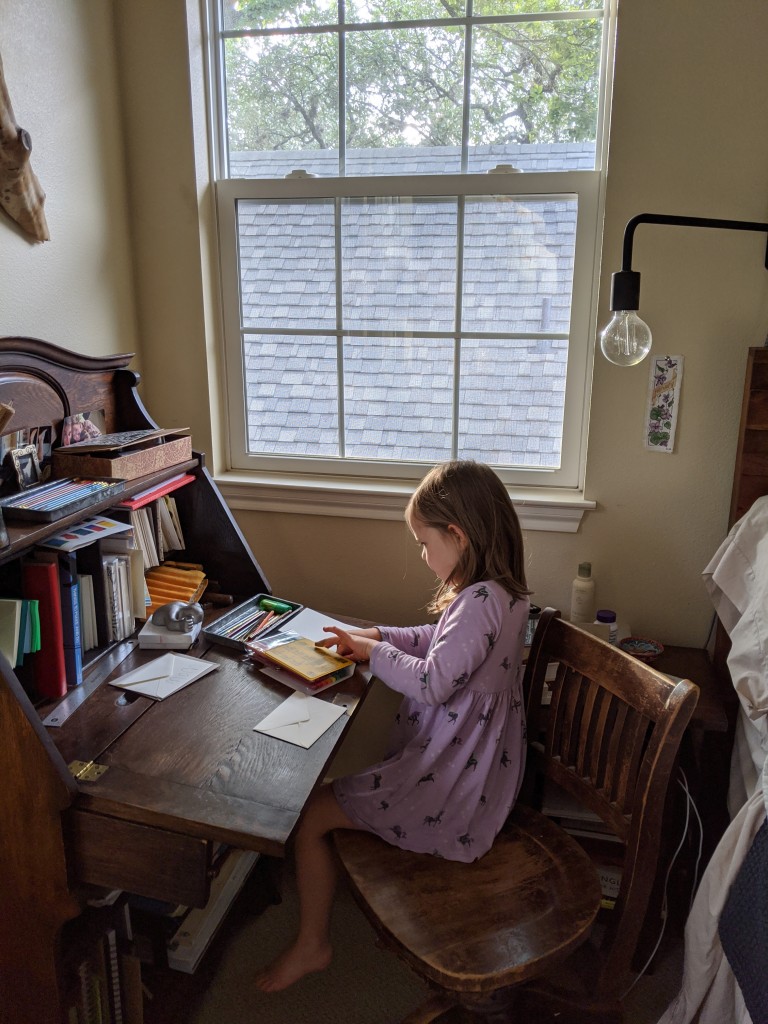 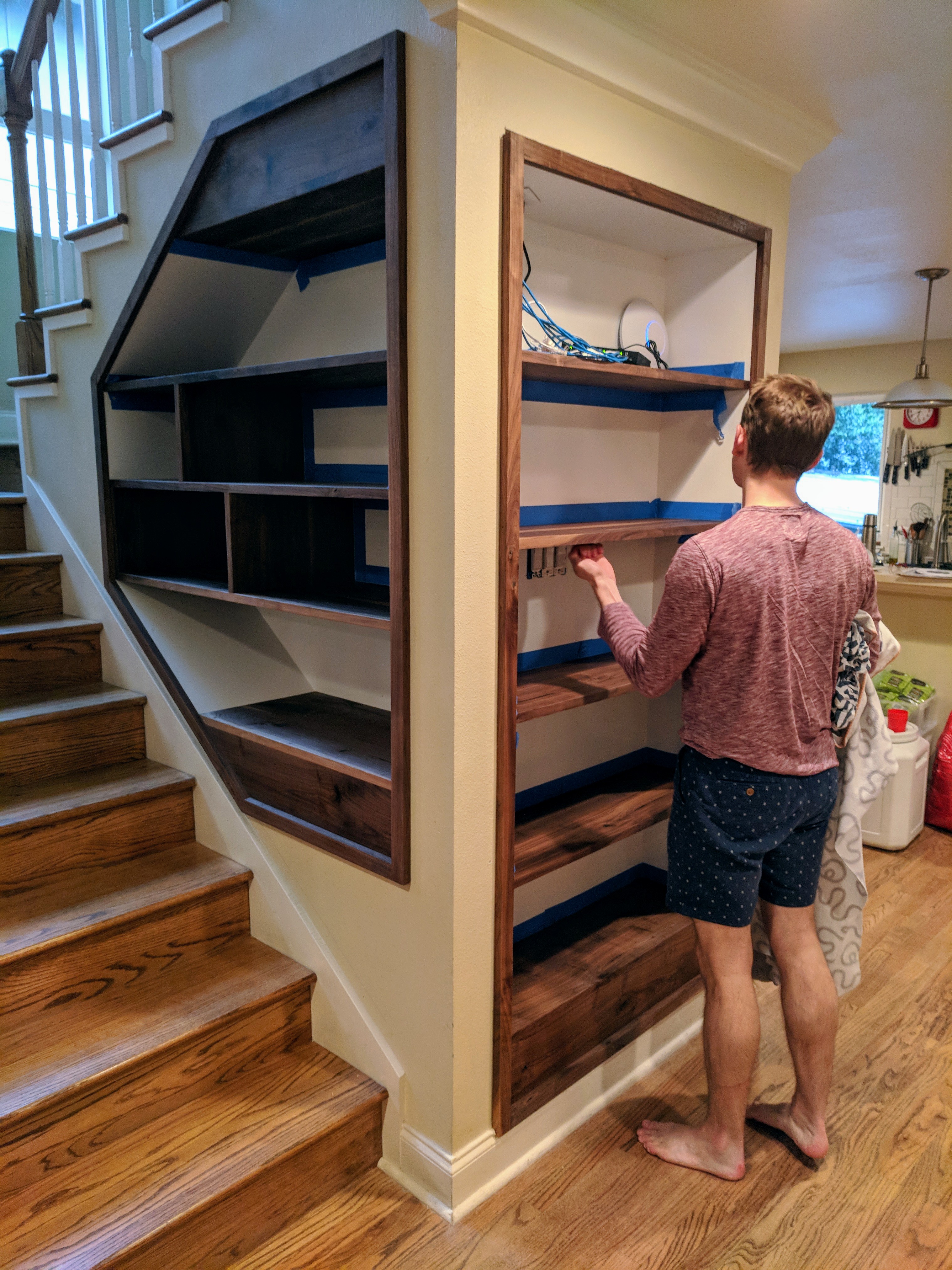 Rabbet Labs is turning our pantry inside out. It’s pretty rad.

Annie finally figured out how to use crayons and chalk, and she’s going at it with gusto, on paper, furniture, window sills, and walls. (Apologies in advance to everyone whose walls she draws on because we thought chalkboard paint was a cute idea.) She carefully uses one hand to position the chalk in her other, in a way that would look familiar to anyone who’s learned to use chopsticks as an adult.

Here’s one of her authorized works, on paper: I agreed with Bryan that it was fine to throw this away once it was photographed…but I may sneak it off to hang on my office wall instead.

I don’t write about it much—well, I don’t write about anything much other than wee Annie—but it’s actually rather significant life news for me that a reuse center I’ve been hammering away at since we moved to Austin three years ago opened its doors today. After half a year of go-it-alone effort to start a branch of California’s Resource Area For Teachers (RAFT), I hooked up with a local crew I typically describe as “a very diverse group of…white…women…” And now, after another stretch of kind of insanely lengthy board meetings and planning and events and crafts and, blerg, fundraising, we signed a lease this summer and today(!) opened to the public.

So, hey! That happened. Who knows if we’ll be able to pay rent in 6 months, but we made it to opening day. Thanks to some timely family intervention, the baby-room walls are painted and the glider is reupholstered.

Just insert me and a squalling infant!

My feelings about fundraising fall somewhere between getting a cavity filled and slowly cutting off all my toes, knuckle by knuckle. “But Leslie,” you might ask, “weren’t you as recently as a year ago trying to raise, like, half a million dollars to open some nonprofit?” And I would not have a great explanation for that. Fortunately, the lovely org where I now channel those efforts includes some ladies with far greater skills at the raising of the funds than I possess, and we also have goals that are (I hope) far more attainable. This allows me to concentrate my efforts where they can be best used: back-of-the-envelope planning, and weirdo crafts. We’re gearing up for a big summer push to raise the money we need for 6 months of expenses to run a retail store and event space, so obviously we needed one of those big fundraising thermometers. So happened that I snagged a bunch of foam core conference signs from a SXSW waste-diversion event we helped with, and so happens also that Bryan is not crazy about the space they’re hogging in our tool shed. A match made in heaven. Special refinement: instead of a boring old thermometer, how about a big arrow like the one in our logo?

INGREDIENTS
Crafty girls, 3-6
Wine, approx 1 bottle per crafty girl
Spanish snacks, to taste
A few ideas that you can still execute after a bottle of wine
A mess of old t-shirts
Fabric scissors, 1 pair per crafty girl
Healthy willingness to be silly News to no one who knows me: I took an upholstery class last fall, from a local studio that used to operate the program at Austin Community College before budget cuts forced them to go private. I had a ball and have enjoyed adopting it as a new hobby. But there was also a specific purpose. Probably 40% of the furniture in our new home was generously passed to us by family, including two couches that originally belonged to my grandparents in the 60s. Beautiful bones, ragged gold velour upholstery. I didn’t take a great “before” shot, but this one will serve: The sunlight makes the old upholstery look prettier and less threadbare than it had actually become.

I have always loved these couches and was thrilled to adopt them, but they were in desperate need of a facelift. Getting them reupholstered was to be our housewarming gift from my parents. After getting a choke-on-my-drink bid of $1500 plus the cost of the new fabric, however, I did a little budgeting and figured that for that price, I could take the class, buy a bunch of tools, cover the cost of my practice chair/materials, and then some. (As long as I valued my labor at $0/hour, of course. Among the lessons of the class was that upholstery is a labor-intensive business; $1500 was a totally reasonable price.) So, that’s exactly what I did.

I began couch reconstruction in February, beginning with what I think of as the “real” upholstery, i.e. that which involves staples. Then I began recovering the cushions, which could happen more gradually since it didn’t disrupt the living room. We had two-tone couches for about a month.

The back cushions were the final step, made with new “super-soft” foam that also served as a pretty decent toddler bed for Max in the interim. While I patterned and sewed pillow covers, I listened to a Yale course on early-modern England and Bob Solomon’s Existentialism lectures. A couple of weeks ago, the couches and I became our Authentic Selves: Sous is not allowed on them.

Upholstery update: my chair is complete.